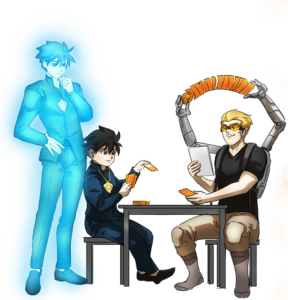 Note: Play Manga d20 is based on, and therefore depends on, the Pathfinder Roleplaying Game rules. With that said, this site is linked extensively to d20pfsrd.com, the premier online rules reference for the rules for that game.

In this roleplaying game resource, we explore anime and its many different genres. To do that, we use The Pathfinder Roleplaying Game 1st edition, balanced against a point-system wherein every race, class, and character option can be summarized and played equally. Each section presented here details an aspect of the game, how it fits into the realm of anime and manga, and how to build characters around that aspect using a combination of traditional gameplay and the point-based system.

What are Anime and Manga?

Anime, or Japanese animation, is a style of cartoon popularized by sweeping stories with larger-than-life characters, some of whom are just trying to get through their day without running into a rival or crazed monster. Manga, which came first, are the comic-book-like stories on which most anime is based (however loosely).

Even the seemingly normal characters in an anime or manga can turn out to be a brave hero, a dastardly villain, or some other important piece of the story’s plot, at times out of nowhere. Characters in these stories find real progression as they sometimes literally transform from who they started out as into the man, woman, or sentient slime they were always meant to be. Along with their friends, they’ll challenge enemies big and small, collect important pieces to a puzzle, or capture other creatures in some way and battle them to achieve their goals.

But manga and anime isn’t just about the characters’ hyperbolic representation. In many stories, even their equipment gets an extreme makeover. Giant, flying robots battle with even more powerful aliens who might be a threat until more robots show up to help, often by combining with the first. These machines could be living creatures all their own, or they could be piloted by the characters to show how the bond they share can overcome any threat.

We have worked hard to tackle each of these aspects throughout Play Manga d20. In doing so, we open the platform to players and Gamemasters alike to build their own stories. Each of the races and classes presented here also include a little bit of backstory for why they might exist within an anime-focused game, but groups are encouraged to offer their own reasons and make them what they need to have the most fun. After all, modifying any aspect of a given race or class should be as easy as finding how many points something is worth and replacing it with an equal attribute (more on these later).

Play Manga d20 consists of 3 primary sections, each broken up into different sections.

The Races section includes the most common races found in anime and manga, as well as a summary of several other races who can be included should they fit a specific character idea or story.

Fantasy Races: From angels, to devils, and everything in between, fantasy races are summarized on page 4 for those who would benefit from playing a dwarf or elf.

There are 15 new classes appropriate for a game set in an anime universe. While games will often pick a theme and stick to it using only some of these classes, they are all balanced with each other to offer the best compatibility during play. Classes introduced here include a combination of archetypes and class- specific options they can take advantage of as the game progresses.

This site also breaks down each of the standard Pathfinder Roleplaying Game fantasy classes as well as the summoner. Each class is given a summary which balances it out against 300 points, at approximately 14 points per level (plus 20 points at 1st level to represent all of the things a 1st-level character gets). As with the anime classes, fantasy classes receive 1 or more archetypes that provide different ways of playing them within the setting.

This section begins with a look at character creation, how to play a game using point-based characters, and how to incorporate both point-based and traditional characters in the same game.

Next, it provides full details on all of the different attributes, character defects, and restrictions available, as well as their point totals, requirements, and other information. It also includes various feats both new and referenced by the races and classes.

There are several modern weapons and vehicles, along with upgrades that can be applied to either.