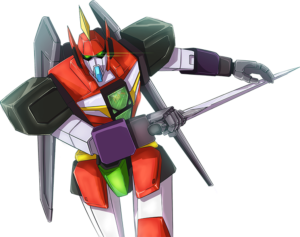 Hailing from a distant planet—or brought to life through the wonders of science and technology—the giant robot can be an amazing ally or a dangerous enemy. Larger than life, it arrives on the scene, ready to take on whatever task it must to achieve its goals.

The giant robot is a heavily armed and armored combatant of immense size. While slow at first, more powerful robots are considerably faster, even with upgraded armor and stockpiles of weapons it can wield easily. Outside of combat, the giant robot is surprisingly smart, able to understand and process situations quickly and often resolve them with efficiency.

The tech genius is often a giant robot’s because the two can exchange ideas and plan upgrades for their equipment together. Similarly, the mech pilot appreciates having a mechanical ally sans cockpit. Hot rods and sentai members are fascinated by giant robots, especially those that can transform into vehicles or more powerful versions of themselves.

Finally, most gun bunnies can’t get enough of the giant robot’s cannons and other weaponry.

Dynamic sorcerers and magical heroes will occasionally find an interest in a giant robot with some magical components, but otherwise leave them be.

Pet monster trainers study giant robots, wondering how they might capture one for their competitions.

Samurai and their ilk are willing to work with giant robots, but prefer subtler ways of handling their opponents.

A giant robot isn’t representative of a race like other classes. Instead, the race of the giant robot is more akin to a model, so an elf giant robot would have a more lithe frame than that of a dwarf model. The most common model of giant robot is human, and only legend speaks of dhampir or slime-model giant robots.

Human: Gain 1/6 of a new customization.

Orc: Deal +1/2 damage when making only one attack in a round.

Rabbitfolk: Add a +1/2 bonus on Acrobatics checks and Perception checks.

Ratfolk: Add +1 to the giant robot’s base speed. In combat this option has no effect unless the robot has selected it five times (or another increment of five). This bonus stacks with the monk’s fast movement class feature and applies under the same conditions as that feature.