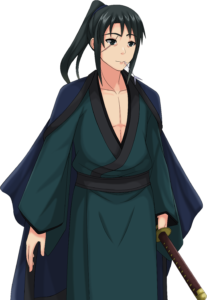 When not called to honor their lord in formal combat, many samurai protect the homes where they grew up. During times of peace, those who refuse to go back to a normal life of farming or municipality have earned the nickname kagashi, or scarecrow. More traditional samurai take offense to this, while others embrace the name, fashioning their armor to appear as kami and oni.

Kagashi prefer to frighten their enemies Instead of killing.

It is a rare kagashi who cannot find some reason to enjoy the company of another when not facing them directly in battle. Because so much of their outward appearance is created with the intent of putting fear into the minds of their enemies, most strive to avoid doing so when interacting on a personal level. In fact, kagashi often say that because they can channel their emotions so freely through their samurai persona, it allows them to be their true selves in all other aspects of life.

Dhampir: Add +2 on rolls to stabilize when dying.

Tiefling: Choose the disarm or reposition combat maneuver. Add +1/3 to the kagashi’s CMB when attempting this maneuver (maximum bonus of +4).

* The character must wear their kagashi armor to gain the other attributes of their class, and they must remain loyal to their organizational ties or lose those attributes until they atone.