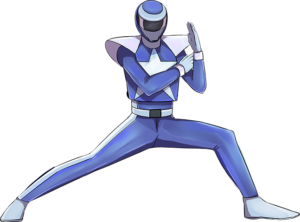 Nobody makes a better team player than a sentai member. Even when not paired with others like him, the sentai member works well with a group of allies who understand him and the talents he brings to the team. When the going gets tough, having a sentai member to help can mean surviving an otherwise challenging situation.

Sentai members are masters at using teamwork feats and other attributes that pair well with each other. When more than one sentai member works together, their coordinated actions, armor, and motivations can be both intimidating to enemies and inspiring to allies.

Mech pilots and pet monster trainers get along best with sentai members because they know what it’s like to be relied on by a team. Gun bunnies, magical heroes, martial artists, samurai, and students see their coordination as something to strive for, while hot rods, ninjas, and shapechangers are surprised they can get anything done on their own.

Catfolk: Add +1 foot to the size of all the sentai member’s aura class features. This option has no effect unless the sentai member has selected it 5 times (or another increment of 5); an aura of 14 feet is effectively the same as a 10-foot aura, for example.

Ogre: Add +1 to the sentai member’s energy resistance to one kind of energy (maximum +10).

Slime: Add a +1/3 bonus to AC when within 5 feet of an ally. This counts as cover and does not stack with other bonuses gained for having cover.

* At 1st level, the sentai member chooses which one of their saving throws uses the good progression, leaving the other two with the poor progression.

** Choose Coordinated Tactics or Solo Tactics as a bonus feat.