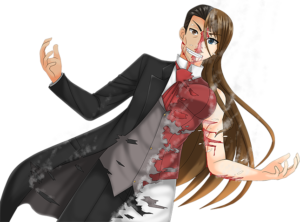 Masters of mimicry, shapeless of form, and specific of function; shapechangers exist to confound their enemies. When they need, a strong enough shapechanger can take the form of a specific individual or monster, or change their physical form permanently through careful application of evolutions.

On their own, shapechangers are neither tough, nor very combat oriented. Utilizing their access to evolutions and other shapechanging abilities such as wild shape, they can take on aspects of other creatures that make them formidable opponents.

Most other classes are leery of shapechangers, whose personalities can change as often as their physical form. Living and growing as a doppelgänger allows them to befriend almost any creature, at least superficially.

Shifter’s Fury: The shapechanger can treat her claws as manufactured weapons when making bonus attacks.

With their ability to be just about anything, shapechangers rarely pick up the specific benefits of gaining favored class bonuses as members of their original race. Instead, all shapechangers, regardless of race, can choose the following options in place of the standard +1 hit point or skill rank per level.

Each additional time the shapechanger selects this benefit, the DR increases by +1/2 (maximum DR 5).

The following evolutions are specific to the shapechanger class.

A character with the Resilient Shape evolution increases their maximum hit points by 2 + 2 per shapechanger level.