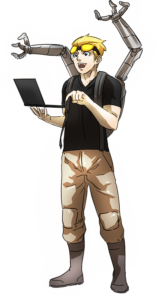 Like their fellow students, tech geniuses celebrate their education and mastery of all things mechanical. Natural craftspeople, tech geniuses are always on the lookout for new and exciting ideas that can be translated into some new creation.

Tech geniuses are similar to wizards, except that their talent lies not in the arcane, but in the mechanical. They learn what others tend to mistake for spells, but which require precise calibration, propulsion, and execution of technology to achieve the results they are looking for.

With enough training, a tech genius could upgrade a hot rod’s ride, a mech pilot’s giant mobile armor, or a gun bunny’s arsenal. They could even repair a giant robot. Adventurers and samurai believe the tech genius could find better ways to spend their time, and although pet monster trainers come to tech geniuses for help with mechanical companions, they fail to understand how closely related their gifts are.

** Tech school is identical to a student’s major, but is limited to Arcana, Computers, Crafting, Medicine, Mechanics, or Performance. If Arcana is chosen, the spells learned are technological in nature, not magical.