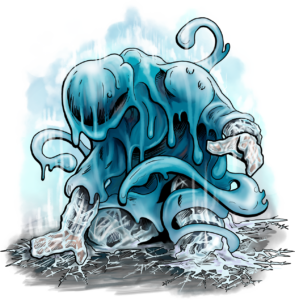 When the first young man found himself unfortunately transformed into a hedoro, it was largely believed to be an accident. Later, it was learned that whatever waste was created from the decomposition of magical creatures was the true cause, and every effort was made to prevent more people from becoming chemical slimes.

The efforts were in vain, however, because the magic had already begun to seep into the water tables. While it was determined not to always have a negative effect, the occasional student, mother, or coworker does suddenly call in to advise that they too have become hedoro.

Ability Score Modifiers: +2 Dexterity, +4 Constitution, –2 Wisdom: 5 points. If not for their size, hedoro would be strong and tough, if sometimes lacking in common sense.

Tiny: 4 points. As Tiny creatures, hedoro gain a +2 size bonus to AC and attacks and a +8 size bonus on Stealth checks, but suffer a –2 penalty to CMB and CMD. A hedoro takes up a space of 2-1/2 feet x 2-1/2 feet, allowing it to share its space with up to 3 other tiny creatures.

Special Movement: Climb 2 points. A hedoro has a climb speed of 20 feet and a +8 racial bonus on Climb checks.

All-Around Vision: 4 points. A hedoro’s slime-like form grants it a +4 racial bonus on Perception checks and makes it immune to flanking.

Type: 3 points. All hedoro are aberrations. This grants them darkvision out to 60 feet.

Amorphous (0 points). A hedoro can squeeze into spaces 3 inches wide or larger, but it cannot bring any equipment with it. In addition, a hedoro’s amorphous form prevents it from wearing armor of any kind, but does grant it Damage Reduction 2/bludgeoning.

Chemical Augury (Sp): 6 points. When a hedoro witnesses another creature cast a 2nd-level or lower spell or use an extraordinary, spell-like, or supernatural ability, it can use a standard action within 1 minute to alter the chemicals in its body to learn how to mimic that ability temporarily. The effective spell level of the ability gained is equal to a spell of the same name, or half the Hit Dice of the creature using it (minimum 1, maximum 2) if no such spell exists. If the equivalent spell exists at different levels, the hedoro uses the highest level at which it could be gained. Once per day, an ability learned with chemical augury can be cast by the hedoro as a spell of the same level and uses the hedoro’s Constitution modifier in place of another (grit, for example, normally uses Wisdom). Constant abilities last a number of hours equal to the hedoro’s total Hit Dice (minimum 1). Abilities with no spell equivalent are mimicked exactly as they were used, except that any save DCs are replaced by 10 + 1/2 the hedoro’s total Hit Dice + its Constitution modifier. A hedoro can learn one ability + one additional ability at Hit Dice (rank 4) and every 3 ranks of Hit Dice gained thereafter (up to its Constitution modifier). If it learns a new ability, the hedoro must choose another to remove at the same time.

Tentacles: 2 points. A hedoro has 2 secondary tentacle attacks with 5-ft. reach that each deal 1d2 + 1/2 its Strength modifier damage (any penalty in Strength is added in full instead). The hedoro can use these tentacles like any other creature would use hands, allowing it to wield Tiny weapons and threaten a 5-ft. space around the hedoro.

Bulbous: 17 points (advanced). A bulbous hedoro is a Small creature with +4 Constitution, –2 Intelligence, –2 Wisdom, –2 Charisma. It gains only a +1 size bonus to AC and attacks and a +4 to Stealth, as well as a –1 penalty to CMB and CMD. It can only squeeze into spaces sized for tiny creatures. This alters the hedoro’s ability scores, size, and total cost as well as the amorphous racial trait.

Engulf: 6 points. As a standard action, a hedoro can move up to its speed, attempting to engulf Small or smaller creatures as it passes through their squares. Those creatures can either attempt a Reflex save (DC 10 + 1/2 the hedoro’s total Hit Dice + its Constitution modifier) to move back or aside (target’s choice) or make an attack of opportunity against the hedoro. A creature that fails its save (or makes an attack of opportunity) becomes pinned, which puts it in danger of suffocating and deals 1d6 acid damage each round until the creature breaks the pin with a successful grapple or Escape Artist check.

For each creature it has engulfed, the hedoro grows 1 size category, up to Large (treat as a non-magical enlarge person effect). It can have a total number of creatures engulfed equal to its Constitution modifier. This replaces chemical augury.

Hardened Skin (0 points). Some hedoro develop a filmy skin on their otherwise gelatinous forms. This grants the hedoro a natural armor bonus equal to 2 + its Constitution modifier. A hedoro that squeezes through a space sized for diminutive creatures loses this bonus for 1 minute. This alters amorphous and replaces the hedoro’s Damage Reduction.

When a hedoro gains a new fantasy class level, it can choose one of the following options in place of the usual +1 hit point or +1 skill rank. For favored class bonuses tied to the new classes in Play Manga d20, see those individual class descriptions.

Bard: Add one spell known from the ooze bloodline spell list. This spell must be at least one level below the highest spell level the bard can cast. The spell is treated as being one level higher, unless it is also on the bard spell list (for example, the bard can learn entangle at 4th level and cast it as a 2nd-level spell).

Cleric: Gain +1/5 ability with chemical augury. At +1 or more, the cleric can prepare and cast those spells as 1st or 2nd-level cleric spells.

Monk: Deal +1/2 bludgeoning damage with the first successful tentacle attack each round.

Paladin: Gain +1/5 ability with chemical augury. At +1 or more, the paladin can prepare and cast those spells as 1st or 2nd-level paladin spells.

Ranger: Gain +1/5 ability with chemical augury. At +1 or more, the ranger can prepare and cast those spells as 1st or 2nd-level ranger spells.

Rogue: Deal +1/4 acid damage with the first successful sneak attack each round. This extra damage does not multiply on a critical hit.

Sorcerer: Add +1/2 to the number of times per day the sorcerer can use the acidic ray aberrant bloodline power or the mucus spray ooze bloodline power. The sorcerer must possess the applicable power to select this bonus.

Bloodline Arcana: When casting an ooze bloodline spell, you can choose to suffer 1 point of nonlethal damage per Hit Die (referred to as burn) and reduce the material component cost of the spell by up to 50 cy* per point (to a minimum of 0 cy). This damage cannot be healed without resting for at least 8 hours, and any spell cast as a result ends at that time. You can also use your own slime in place of ice, ooze, and similar components.

Bloodline Powers: As you grow in power, the hideous effects of the pollution in your blood manifest themselves as a series of eerie powers.

Mucus Spray (Sp): Starting at 1st level, you can unleash a cone-shaped burst of acidic mucus within a 15-ft. range. This spray deals 1d6 hp acid damage for every two sorcerer levels you possess. You can use this ability a number of times per day equal to 3 + your Charisma modifier.

Gray Ooze Nature (Ex): At 3rd level, you gain resist cold or resist fire 5 and a +2 bonus on saving throws made against mind-affecting effects (charms, compulsions, phantasms, patterns, and morale effects). At 9th level, your chosen resistance increases to 10 and your bonus to mind-affecting saves increases to +4. In addition, oozes do not attack you unless you move into contact with them. Ooze Form (Sp): At 9th level, you can change your shape for a number of rounds equal to your sorcerer level. These rounds need not be consecutive. This ability otherwise functions as ooze form I. You can also move through and among all creatures with the ooze subtype without suffering any harm. At 12th level, ooze form functions like ooze form II.

Ooze Mind (Ex): At 15th level, you are considered mindless with regard to all spells and abilities. You cannot be targeted by scrying spells and your thoughts cannot be read.

Split (Su): At 20th level, you gain the split ability of an ochre jelly. Only the original has your identity, the rest are mindless. You gain resistance 10 to all energy types.

You assume the form of a Small or Medium ooze. Regardless of the type of ooze you transform into, you gain base speed 10 feet, climb speed 10 feet, swim speed 20 feet, and blindsense 30 feet. You gain a +4 resistance bonus on saving throws against mind-affecting effects and poison. A wood or metal weapon that strikes you takes acid damage as if from your slam unless the wielder succeeds at a Reflex saving throw.

Small Ooze: If you assume this form, you gain a +4 size bonus to your Constitution score, a slam attack (1d3 plus 1d3 acid), and constrict (1d3), and take, a –4 penalty to your Dexterity score.

Medium Ooze: If you assume this form, you gain a +6 size bonus to your Constitution score, a –6 penalty to your Dexterity score, a slam attack (1d4 plus 1d4 acid), and constrict (1d4).

This spell functions as ooze form I except you can also assume the form of a Large ooze. You gain blindsight 30 feet and immunity to critical hits and precision damage as well.