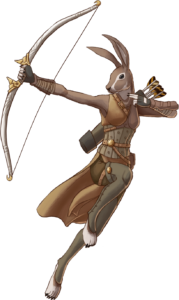 Having fought back the dark elves many years ago, the nousagi were comfortable in their underground burrows and the cities they occupied after the war. But soon, the modern world began to encroach on the rabbitfolk. It started with deforesting and excavations that left their homes exposed. Eventually, the nousagi faced a difficult choice: Fight a new war against the races who lived primarily on the surface and likely lose, or integrate and give up their ancient ways.

Today, nousagi homes and temples can be found in city parks or church districts.

Their cuisine is the talk of health care professionals, and their skill with the bow remains equal to most with more technological weapons. To their credit, the rabbitfolk have adapted to this new life well, and even incorporated parts of it into the surface as well. Now families a continent apart can stay in touch, and the average nousagi lives comfortably alone or with one or two companions. When one gets the urge to do something more, they sign up to join one hero group or another, and some have formed their own power groups of sentai members, further tying their expertise to the magic and mechanical strengths of this new life.

Ability Score Modifiers: +2 Dexterity, +2 Wisdom, –2 Strength (0 points). Rabbitfolk are expert ranged weapons users with a keen eye and a sharp arrow, but they are not as quite strong as the average human.

Special Movement: Jump 2 points. A rabbitfolk always counts as having a running start when making an Acrobatics check to jump.

Senses: Darkvision2 points. A nousagi can see in natural darkness out to 60 feet, but only in black and white with no details.

Type: Nousagi are humanoids with the rabbitfolk subtype.

Hatred: 3 points. Nousagi gain both a +4 dodge bonus to AC and +1 on attacks made against aberrations and humanoids with the elf subtype.

Life Above and Below: 2 points. Rabbitfolk gain a +1 bonus on Knowledge (dungeoneering) and Survival checks made underground as well as Diplomacy, Knowledge (local), and Sense Motive checks.

Weapon Familiarity: 4 points. Before the dark elves encroached on their homes and started a hundred- year war, the rabbitfolk trained with the elves, becoming experts with the bow in their own right. They are proficient with longbows (including composite longbows) and shortbows (including composite shortbows), and begin play with weapon training 1 (bows), which grants them a +1 to attacks and damage with those weapons.