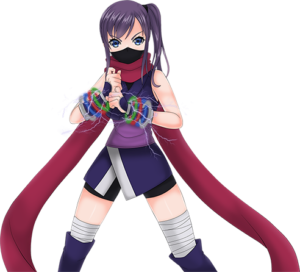 Ninjas who have not yet graduated to jonin are referred to as kunoichi instead. What they lack in experience, kunoichi make up for in willingness to excel against any challenge. As they grow into their role, they become experts in several combat and non-combat tactics, including the ability to sneak without being caught, poison a blade without endangering themselves, and eventually strike with as much finesse as a soldier does power.

A ninja is not accepted as a kunoichi until she understands her basic weapons and combat tactics, including sneak attack. Once she has learned how to channel ki and picked up a few tricks along the way, she becomes ready to take her chunin exam, then jonin, and finally kage. The kunoichi need not cease her training to take these tests; rather, she submits that she is ready and her mentors find time and opportunity to test her while she adventures. Many kunoichi do not even realize they were being tested until they receive their formal declaration of success or failure.

Because they are also still learning, kunoichi get along best with students and magical heroes, and samurai have been known to accept them, even if they often do not trust ninjas. Tech geniuses and hot rods can admire the kunoichi’s persistence, and martial artists love to train with them. Giant robots don’t understand the ninja’s reliance on poison, and sentai members see them as too self-involved. Of the fantasy classes, rangers, rogues, monks, and surprisingly sorcerers keep the best company with kunoichi. Druids and paladins see them as no more than rogues of a different nature, while barbarians find no honor in the use of poison over physical dominance.

* Ninja Tricks are introduced in the Pathfinder Roleplaying Game Ultimate Combat. Alternately, any rogue talent can be a ninja trick.

Dhampir: Add a +1/2 bonus on Stealth checks and Perception checks made in dim light or darkness.

Goblin: Add a +1 bonus on the rogue’s sneak attack damage rolls during the surprise round or before the target has acted in combat.

Tiefling: Add +1/2 to sneak attack damage dealt to creatures with the outsider type.

The competence bonuses gained by each school stack with each other, but only to a maximum of +6. Any spells or special abilities gained from a school treat your kunoichi level as your caster level.

As a member of the Iga, you learn how to manipulate seemingly magical power with a combination of fire and precise movement that you use to make it look as if you are teleporting around the field of battle.

When you join this school, increase your movement speed by +5 feet when in light or no armor and not carrying a heavy load. This speed bonus increases by +5 feet at 3rd, 9th, and 15th level. In addition, you gain a +1 competence bonus on Will saves. This bonus increases to +2 at 6th level, +4 at 12th level, and +6 at 18th level.

Rank Advancement: You gain the following abilities if you advance with the Iga instead of choosing another school.

As a member of the Kouga, you are practiced in the proper application of medicine, which also makes you a responsible poisoner.

When you join this school, you add Heal to your list of class skills and become trained in the use of poison. You cannot accidentally poison yourself when applying poison to a weapon. At 3rd, 9th, and 15th level, poisons applied to your weapons last for 1 additional attack before they are consumed. In addition, you gain a +1 competence bonus on Fortitude saves. This bonus increases to +2 at 6th level, +4 at 12th level, and +6 at 18th level.

Rank Advancement: You gain the following abilities if you advance with the Kouga instead of choosing another school.

As a member of the Rappa, you make others believe you are no more than a common bandit or thief. In truth, you are a highly educated individual who can make precision strikes as easily as informed decisions.

When you join this school, you gain Weapon Finesse as a bonus feat. At 3rd level, you gain a +2 competence bonus on initiative checks. This bonus increases to +4 at 9th level, and +6 at 15th level.

At 6th level, choose Acrobatics, Climb, Intimidate, Perception, or Stealth. You gain the skill unlock powers for that skill as appropriate for your number of ranks in that skill. If you are also a member of Iga, add Bluff to this list.

At 12th and 18th level, you choose an additional skill from your list and gain skill unlock powers for that skill as well.

Rank Advancement: You gain the following abilities if you advance with the Rappa instead of choosing another school.

Any Guise (Su): You can use everyman to disguise yourself as any specific person, even a king or high priest.

Furthermore, if the actual individual wouldn’t normally be able to be found via magic (such as by being dead or protected from divinations designed to locate the individual), such divinations always find you instead.

Many Guises (Ex): You can take on any number of mundane guises. Whenever you change your identity, you have a third option (instead of social or kunoichi): you can become mundane. The mundane identity is not a specific individual. Each one is created at the moment it is assumed, and quickly forgotten as soon as it is removed. While in a mundane identity, you does not gain the benefit of either your social or kunoichi identity, but instead appears as a member of your race, usually a common laborer, farmer, or peasant of any gender. Your alignment is treated as neutral when you is in your mundane identity. While in this identity, you receives a +20 circumstance bonus on Disguise checks to appear like an ordinary member of your race. Spells and abilities that are looking for you in either of your other identities fail while in your mundane identity. You must build the appearance for this identity using whatever clothing and tools you have at your disposal. While you can use magic (such as a hat of disguise), your mundane identity can never be anything other than an ordinary member of a society or large group (subject to GM discretion).

Mockingbird (Ex): You can mimic almost any sort of voice, or even animal calls and sound effects, and you can throw your voice at a distance. This functions similarly to a combination of the ghost sound, ventriloquism, and vocal alteration spells.

Morphic Mask (Su): Your physical form in your social identity can differ significantly from that of your kunoichi identity, within the norms for your race—this can include changes to your proportions, coloration, gender, and other physical characteristics. This increases your bonus on Disguise checks by 2 for every significant change, as per the Disguise skill. You always assumes the same form when using this ability. If you are a race with multiple natural forms, such as a kitsune or xendauni, you can alter each of your forms using this talent.

Quick Change (Ex): You learns to shift between your identities with ease. Instead of needing 1 minute to change your identity, you can now do so in 2 rounds.

Social Grace: You selects any one Intelligence-, Wisdom-, or Charisma-based skill other than Perception or Use Magic Device. Whenever you are in your social identity, you receive a circumstance bonus on checks with the selected skill. At 5th level and every 4 levels thereafter, you can select another skill (with the same restrictions) to gain this bonus.

As a member of the Sanka, you work outside of the cities where other ninja dwell, preferring the cover of a canopy overhead, or the feeling of unworked ground beneath your feet.

When you join this school, you add half your kunoichi level to Survival checks made to follow tracks. At 3rd level, you gain darkvision out to 30 feet or increase your darkvision by 30 feet. At 9th level, you gain swift tracker. At 15th level, you can spend 1 ki point as a move action to see through magical darkness effects for up to 10 minutes as if you were using true seeing. In addition, you gain a +1 competence bonus on Fortitude saves. This bonus increases to +2 at 6th level, +4 at 12th level, and +6 at 18th level.

Rank Advancement: You gain the following abilities if you advance with the Sanka instead of choosing another school.

As a member of the Suppa, you can easily pass yourself off as others, making it a challenge to determine who or what you really are.

Rank Advancement: You gain the following abilities if you advance with the Suppa instead of choosing another school.

As a genin, you gain the morphic mask social talent. You also gain the social grace social talent, but the bonus to skills from that talent is only +2.

As a chunin, you gain the many guises and mocking bird social talents.